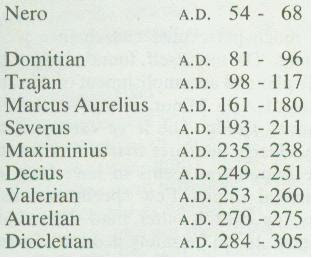 The other night in my Revelation discipleship class at FBC, we came to the portion of Scripture in Revelation 2 where it says in v.10, "Do not fear what you are about to suffer. Behold, the devil is about to cast some of you into prison, so that you will be tested and you will have tribulation for ten days." The question arose about the "ten days". Most commentaries (I.e. John MacArthur) say that "ten days" simply represents a short period of persecution. However, Tim LaHaye has a very interesting take on it that one of my students pointed out. He says that there were ten persecutions: eight of which the Church of Smyrna had to endure. Check out the ten persecutions that he lists. Could each one of these represent one of the "ten days"?
Posted by Dwayne Spearman at 9:07 PM