What If There Is No Hell? 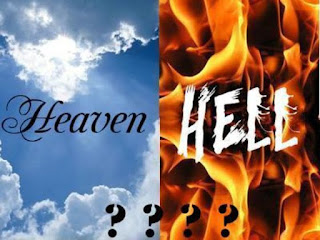 In my last blog, we looked at the reality of hell according to the Scriptures. Today, I want to address the question to the best of ability, "What if there is really no hell?" Just some things to think about. I am sure that there could be more.
Just a few things to think about. First, if there is no hell, then the Bible is just a fairy tale and cannot be trusted. If some parts of it are true and some parts of it are false, how are we to determine which is which? Rely on the experts? Second, if there is no hell, the prophets, apostles, and preachers of old were all liars at worst and deluded at best. The same could be said of Jesus. Third, if there is no hell, Jesus' death on the cross was a mistake and really served no purpose because he would have saved us from nothing. Fourth, if there is no hell, then there is no heaven either; and if there was, what would be the point?  Fifth, if there is no hell, Christianity is of little use other than possibly for a set of moral codes. Even then, those codes would be built upon the lies and delusions of others. Sixth, if there is no hell to receive us, then there is no God to condemn us. In the end, if there is no hell, Christianity is false and virtually a waste of time.
This reminds me of a story of two men who were fishing two or three miles from a dangerous waterfall. Eventually, after a little conversation, they got on the subject of hell.  One man asked his friend, “Do you believe in hell?” “No,” replied the other man. All of a sudden they looked up and found they were about fifty feet from the falls. They grabbed the paddles, pulled for dear life toward the shore, and finally reached safety. The fellow said, “I thought you didn’t believe in hell, what was the matter when you thought that you were going to die?” He responded, “Listen, this business of no hell is alright to go fishing with, but not over the falls with.” I explain it to people this way. If there is no hell, I have absolutely nothing to lose. I would have lived a moral life. However, if there is a hell, you will lose everything.
To that same point, there is an occasion when Col. Robert G. Ingersoll, an agnostic lecturer of the last century, was announced to give an address on hell. He declared he would prove conclusively that hell was a wild dream of some scheming theologians who invented it to terrify credulous people. As he was launching into his subject, a half-drunken man arose in the audience and exclaimed, "Make it strong, Bob. There are a lot of us poor fellows depending on you. If you are wrong, we are all lost. So be sure you prove it clear and plain."
I believe that there have been two occasions for great joy among Satan and his angels since creation. The first is when he tricked Eve by telling her that she would not suffer the consequences of her disobedience, and the second, when he persuaded preachers to not preach on the subject of hell anymore. After all, we’re an educated society! It is repugnant to reason! It is on the level of “Dante’s Inferno”. It is the product of a crazy person. We live in the age of enlightenment.  No one believes in hell anymore, right?

My summation is quite simple. Either the Bible is true or it is not. Stop playing games. It is one or the other, and nothing in between. You believe in its totality or you don't. It clearly teaches that there is a heaven for the saints and a hell for the aints. Denying it will not erase it no matter how much we wish it so.
Posted by Building Lives International at 10:12 AM