Today we pick up in Acts 3:21 and complete the chapter and introduce chapter 4. In these passages, Peter points to Jesus as the fulfillment of Moses' prophecy about a Prophet that would come, the Gentiles were still not in focus yet, i.e., the Body of Christ, and that the offer of the Kingdom was still on the table. 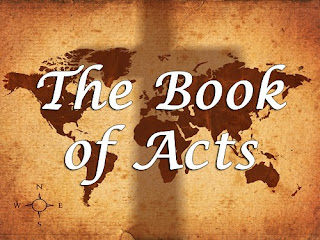 VERSE 21: Whom the heaven must receive until the times of restitution of all things, which God hath spoken by the mouth of all his holy prophets since the world began. The times of restitution speaks of when all things are restored. The word restitution means the restoration of something lost or stolen to its proper owner. In other words, life would go back to the time before the fall of man in the garden so many years ago when man disobeyed and brought death and destruction upon himself and all that would come after him. The Bible says that the last enemy to be defeated is death in 1Cor 15:24-26.

VERSE 22-23: For Moses truly said unto the fathers, A prophet shall the Lord your God raise up unto you of your brethren, like unto me; him shall ye hear in all things whatsoever he shall say unto you. And it shall come to pass, that every soul, which will not hear that prophet, shall be destroyed from among the people. This is a quote from Deu 18:15 and Deu 18:18-19. Jesus was most likely referencing this prophecy when he said in John 8:28, Then said Jesus unto them, When ye have lifted up the Son of man, then shall ye know that I am he, and that I do nothing of myself; but as my Father hath taught me, I speak these things.

Peter is showing them that Jesus was the Prophet that Moses foretold would come.

VERSE: 24 Yea, and all the prophets from Samuel and those that follow after, as many as have spoken, have likewise foretold of these days. Notice that all of this language is still Jewish. The Mosaic prophecies were to Jews and Jews alone. Peter is referring to the covenant that God made with the people of Israel in Gen 12:3. Again, no Body of Christ is in view here.

Foretold in these days is referring to the time in which they were living. Not the days in which we are living. Again, OT prophecies are fulfilled in the nation of Israel alone.

VERSE 25: Ye are the children of the prophets, and of the covenant which God made with our fathers, saying unto Abraham, And in thy seed shall all the kindreds of the earth be blessed. Make no mistake Israel is in view here, not the Body of Christ. At this point, the Gentiles are still strangers from the covenants of promise as Paul stated in Eph 2:12.

Peter now reminds them of the covenant that God had made with Abraham which involved them becoming a nation, with land and a king. We must come to grips in the church today that prophecy relates to the nation of Israel. They are the center of prophecy, not us. They are at the heart of what God is doing. Yes, we get blessed, but it is not about us. To make this point, Les Feldick points out Deu 32:8 that tells us that the Lord divided the nations according to the number of the children of Israel. Do we get blessed because of it, sure we did, but His desire was to use Israel to save the Gentiles (Isa 43:1; Isa 49:5-6; Isa 59:20-21; Isa 60:1-3).

VERSE 26: Unto you first God, having raised up his Son Jesus, sent him to bless you, in turning away every one of you from his iniquities. Finally, there is no doubt from the context that Peter is making it clear that the offer of the Kingdom was still on the table if they would just repent and be converted. Of course, it didn't happen, so God went around the Jews and went straight to the Gentiles without them.

Some will point out that just as God used forty years in the desert to get the nation to repent in the Old Testament, so He gives them forty years from Pentecost to the destruction of Jerusalem in 70 AD. That, of course, would be assuming that Pentecost occurred in 30 AD.

His message will be interrupted in the next verses because they had offended the Sadducees.

Chapter 4
VERSE 1-6: And as they spake unto the people, the priests, and the captain of the temple, and the Sadducees, came upon them, Being grieved that they taught the people, and preached through Jesus the resurrection from the dead. And they laid hands on them, and put them in hold unto the next day: for it was now eventide. Howbeit many of them which heard the word believed; and the number of the men was about five thousand. And it came to pass on the morrow, that their rulers, and elders, and scribes, And Annas the high priest, and Caiaphas, and John, and Alexander, and as many as were of the kindred of the high priest, were gathered together at Jerusalem. The Sadducees were offended because they did not believe in the resurrection, so as far as they were concerned, Peter was preaching heresy.
Posted by Building Lives International at 10:54 AM