We are continuing to work our way through the book of Acts verse-verse. Today we see the conclusion of the council that the Gentiles did not have to be circumcised or come under the Law in any way. However, it was determined that there were certain "necessary" things that they deemed should not be done by the new Gentile believers lest they should cause a rift with their Jewish brothers. 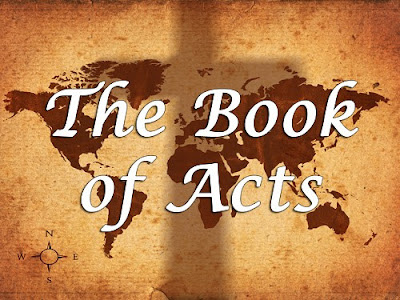 No doubt, as we have studied through the book of Acts we have seen that the first Gentiles to be offered salvation were Cornelius and all of them who heard the word with him (Acts 10:44).

Notice Simeon has declared how God at the first did visit the Gentiles. Understand, context is key, James is not talking about Paul's ministry here, but further elaborating on Peter's in regards to the conversion of Cornelius.

VERSES 15-17: And to this agree the words of the prophets; as it is written, (16)  After this I will return, and will build again the tabernacle of David, which is fallen down; and I will build again the ruins thereof, and I will set it up: (17)  That the residue of men might seek after the Lord, and all the Gentiles, upon whom my name is called, saith the Lord, who doeth all these things. To back up what he is getting ready to say, he quotes from one of the prophets, Amos. He is simply saying that it was always in God's plan to reach the Gentiles through the Jews (Amos 9:11-12). Amos is speaking of the Kindom that would come for both Jew and Gentile.

If you read Amos 9:12 and Acts 15:17, you will see that Amos says remnant of Edom and James says residue of men. Why would he do that? They do not appear to be the same. Edom and Adam are the same words in Hebrew. James actually seems to have quoted it the more accurate way, i.e. residue or remnant of Adam (mankind). Either way, James is speaking of the Kingdom.

VERSE 18: Known unto God are all his works from the beginning of the world. In other words, he is saying that either way, through the preaching of the Kingdom under Peter, or the preaching of Grace under Paul, God knows what he is doing and the Gentiles are being reached.

VERSE 19: Wherefore my sentence is, that we trouble not them, which from among the Gentiles are turned to God: Now, James gives his summation about what needs to be done in regards to the Gentiles that come to faith, and it is obvious from what he says in the next verses that he is referring to the Gentiles who come to faith through the Grace Gospel because it is all about them not having to keep the Law.

If any man could speak to this matter, it was James, considering he had already or would pretty soon written his epistle to the Kingdom believers that required them to keep the Law from the first verse to the last verse.

VERSES 20-21: But that we write unto them, that they abstain from pollutions of idols, and from fornication, and from things strangled, and from blood. (21)  For Moses of old time hath in every city them that preach him, being read in the synagogues every sabbath day. James goes on to recommend these things because they were highly offensive to the Jews who were still very much under the Law of Moses, believing and the unbeliaving, and would only serve as a distraction if Paul, and those who responded to his new Grace Gospel, were to violate them in front of them. This is what Paul meant in 1Cor 8:13. There is still a principle here for all time.

VERSE 22: Then pleased it the apostles and elders, with the whole church, to send chosen men of their own company to Antioch with Paul and Barnabas; namely, Judas surnamed Barsabas, and Silas, chief men among the brethren: First, we see a bit of a congregational style of government here. Second, we are introduced to Silas for the first time. He would become very important to Paul in his next missionary journey which would begin in v.36.

This verse is also notable because it makes it very clear that the Twelve were in agreement with Paul and the Grace Gospel that he taught to both Jew and Gentile. This is apparently obvious in that they sent Judas surnamed Barsabas and Silas, chief men among the brethren with him. Barsabas and Silas were obviously Kingdom believers.

VERSES 23-24: And they wrote letters by them after this manner; The apostles and elders and brethren send greeting unto the brethren which are of the Gentiles in Antioch and Syria and Cilicia: (24)  Forasmuch as we have heard, that certain which went out from us have troubled you with words, subverting your souls, saying, Ye must be circumcised, and keep the law: to whom we gave no such commandment: The council denies sending out any words that indicate that the Gentiles should be circumcised and keep the Law.

VERSES 25-27: It seemed good unto us, being assembled with one accord, to send chosen men unto you with our beloved Barnabas and Paul, (26)  Men that have hazarded their lives for the name of our Lord Jesus Christ. (27)  We have sent therefore Judas and Silas, who shall also tell you the same things by mouth. In ecclesiology class, I learned that this verse indicates the autonomy of the local church. These men that they had chosen were to be eyewitnesses for anyone who questioned Paul and Barnabas' account of events.

VERSE 28: For it seemed good to the Holy Ghost, and to us, to lay upon you no greater burden than these necessary things; Again, these things are not necessary for salvation, but they are, as he said in v.21, that the Jewish believers who sit in the synagogues where the Law of Moses in preached be not offended.

VERSE 29: That ye abstain from meats offered to idols, and from blood, and from things strangled, and from fornication: from which if ye keep yourselves, ye shall do well. Fare ye well. They include: abstaining from meats offered to idols, from blood, from things strangled, and from fornication. Why these? All of these would offend their Jewish brothers in such a way that it might hinder both of their ministries. In regards to meats, Paul addressed this further in 1Cor 8:4-13. In regards to blood, it was about the sanctity of life Lev 17:14. Some would say strangling is a violation of that sanctity. In regards to fornication, this spoke of all sexual sins.

The counsel simply believed that if the Gentiles would guard against these things, it would make their ministry easier, and fellowship between the two would not be hindered. Understand, this whole conversation began over the issue of circumcision as a requirement for salvation. That was ruled out, and these burdens, v.28, were considered to be necessary so that ministry could continue. An example of this will be found later when Paul will actually ask Timothy to be circumcised in Acts 16:1-3. Not salvific, but deemed necessary that the ministry may go on.

VERSES 30-31: So when they were dismissed, they came to Antioch: and when they had gathered the multitude together, they delivered the epistle: (31)  Which when they had read, they rejoiced for the consolation. Upon sharing this letter with the church at Antioch, they were relieved that they were not being asked to place themselves under the Law. In the end, the outcome is that both the Kingdom and the Grace believers are confirmed (Gal 2:7).