Are We Living in the New Covenant? 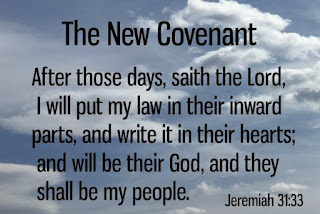 The question that I posed to my Bible study last week was simple, "Are we living in the New Covenant?" After all, in all of our Bibles, there is a page between Malachi and Matthew which clearly says, "New Testament" which means New Covenant.

First, we must understand that the New Covenant was a promise that God gave to the nation of Israel that he would bring them back unto their land where they would realize the blessings promised to their fathers (Luke 1:72-75). The beginnings of this covenant are found in Deuteronomy 30:1-9 where God promises he will: have compassion on them (30:3), gather them together from out of the nations (30:3-5), allow them to dwell in the promised land (30:3-5), circumcise their heart so they can obey the commandments (30:6-8), and make them plenteous in every work of their hands (30:9).  The end result would be that the covenant would provide for their redemption and institute what was needed to begin God’s plan for blessing the "kindreds of the earth" through their priesthood (Gen 12:3, 22:18, Acts 3:25). In other words, what Israel failed to accomplish on their own under the Old Covenant, God would provide for them under the new.

The prophets also reminded the Jews of the promised New Covenant when Jeremiah says in Jeremiah 31:31, "Behold, the days come, saith the LORD, that I will make a new covenant with the house of Israel, and with the house of Judah:”. He also goes on to describe how God will put his "law in their inward parts" and will "remember their sin no more" (Jeremiah 31:33-34). Ezekiel also describes the supernatural empowerment that will accompany the New Covenant as he writes, “And I will put my spirit within you, and cause you to walk in my statutes, and ye shall keep my judgments, and do them" (Ezekiel 36:27). Ezekiel goes to mention how God will do several things that Jeremiah also mentioned when he said that He will gather them from all countries (36:24), allow them to dwell in the Promised Land (36:28), multiply the fruit of the tree and the increase of the field, and they would receive no more reproach from the heathen (36:30).

Also, in the book of Romans, Paul says that Jesus was a minister to the circumcision to "confirm the promises made unto the fathers" (Romans 15:8). Hebrews tells us that Jesus came as the mediator of the New Covenant. Jesus testified to just that during the Passover supper with the disciples when he described the symbolism of the meal when he said, "For this is my blood of the new testament, which is shed for many for the remission of sins” (Matthew 26:28). Christ spent his earthly ministry preparing his followers for the coming Kingdom and the New Covenant by teaching them about the law and how they would receive supernatural empowerment that he would send to do so in John 14:26 and Matthew 6:24-33. Hebrews also tells us that the new covenant could not be in force until after Christ died when it says, "For a testament is of force after men are dead: otherwise it is of no strength at all while the testator liveth” (Hebrews 9:17). So, when Jesus died, he sent down the "Comforter" who would prepare them for the New Covenant with power to enter the kingdom (John 14:26).

It is the same "better covenant" that the author of Hebrews refers to in Hebrews 8:6 when he says, "But now hath he obtained a more excellent ministry, by how much also he is the mediator of a better covenant, which was established upon better promises.” Also, it must be understood that before He  could bring in the new covenant, Israel's past transgressions under the old covenant had to be redeemed according to Hebrews 9:15 where the author said, "And for this cause he is the mediator of the new testament, that by means of death, for the redemption of the transgressions that were under the first testament, they which are called might receive the promise of eternal inheritance."

Are we living in the new covenant? No, we are not. While it was offered, it was never realized because the nation of Israel rejected the message and the Messenger. As a result, God raised up the Apostle Paul to reveal the mystery of the church which will continue until "the fullness of the Gentiles be come in" (Romans 11:25-27), during which time He will reconcile the world back to Himself apart from any covenant or special people (2 Cor 5:19). During this current dispensation, believers receive the benefits of the redemptive work of Christ on the cross outside of any covenant relationship. Today there is neither Jew nor Gentile. Paul said that "God hath concluded them all in unbelief, that he might have mercy upon all” in Romans 11:32.
Posted by Building Lives International at 8:43 AM