Mediator of the New Testament 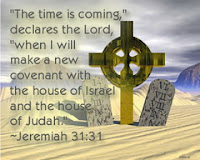 Hebrews 9:15 says, “And for this cause he is the mediator of the new testament, that by means of death, for the redemption of the transgressions that were under the first testament, they which are called might receive the promise of eternal inheritance."

I have been studying this verse for a few days now. In all my years of ministry, I have been averse to studying the book of Hebrews. Not sure why, but I am finding that it is a treasure trove. Maybe it is because I have heard interpretations that I knew could not be right.

Be that as it may, this is the verse I am currently looking at. Notice that it says that Christ is the mediator of the New Testament, or as most of us refer to it, the New Covenant. No doubt, we all know that, but I would disagree with those who go so far as to say that we are under said New Covenant and I will explain why. This covenant, as with all covenants, is with the nation of Israel and their future redemption. To say otherwise is Replacement Theology.

Notice also that it says that he did this "by means" of his death. This speaks of his act of mediation through which he became the arbitrator in the dispute between God and Israel in regard to their "transgressions that were under the first testament" which had not been permanently removed through the temporary atonement that was provided through the sacrifice of animals (Hebrews 10:4). So, Christ's death on the cross was to provide redemption for the sins of Israel that they committed under the first covenant so that they (Israel) "might receive the promise of eternal inheritance" which will come to them through the New Covenant.

So, are we, the Body of Christ, living under the New Covenant? No, we are not, because it is not for us. The covenant was never actualized because the offer of the Kingdom was rejected by the nation of Israel. It will be instituted at the Second Coming and in full force during his millennial reign.
Posted by Building Lives International at 7:38 PM