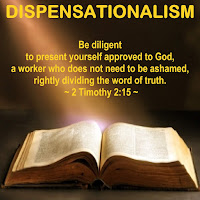 With so much confusion in the church today about Covenant Theology and Dispensational Theology, I wanted to just take a moment to define them both briefly and to present the latter as the one that I embrace and why. Yes, I am a dispensationalist. Just for clarification, neither of them are really a theology as much as they are a framework for interpreting the Scriptures. In other words, they are a lens through which the Scripture is viewed.

Covenant Theology is favored more so by those of a Reformed or Calvinistic persuasion. However, in the United States, especially among Evangelicals, Dispensationalism is far more popular and has been since the latter half of the 19th century. Please also understand that even among each, there are disagreements, but they are basically the same in their overall approach. I am only scratching the surface in this blog post.

At the risk of oversimplifying both, the difference between the two is that one interprets the Scriptures through the lens of covenants, i.e., Noahic, Abrahamic, Mosaic, Davidic, and the New Covenant, while the other interprets the Scriptures through the lens of dispensations. A dispensation by this definition is the particular means by which God deals with man and creation during a given period in redemptive history. In the most popular view, there are seven dispensations which which include: Innocence (Genesis 1 -3) - Adam and Eve before they sinned, Conscience (Genesis 3-8) - First sin to the flood, Civil Government (Genesis 9-11) - After the flood, government, Promise (Genesis 12-Ex. 19) - Abraham to Moses, the Law is given, Law (Exodus 20 - Acts 2:4) - Moses to the cross, Grace (Acts 2:4 - Revelation 20:3) - Cross to the millennial kingdom Millennial Kingdom (Rev. 20:4-6) – The rule of Christ on earth in the millennial kingdom.

As I stated earlier, I am convinced that the dispensational view is the correct one because it requires a consistently literal interpretation of Scripture while the other does not. Covenant Theology uses a lot of allegorization. The earliest proponent was Augustine, the father of amillennialism, who used what is called a "dual hermeneutic" by bouncing between literal interpretation and allegorical interpretation to arrive at such doctrines as amillennialism. This approach must be utilized in order to arrive at many things that are embraced by those on that side of the aisle and is the main reason that I reject it. It is also how they arrive at such teachings as the Church is spiritual Israel (Replacement Theology), therefore, God has no special purpose for the people of Israel. I could go further, but time does not permit. Suffice it to say they do not interpret the Scriptures literally. For straightforward compare and contrast, I would recommend an article by Dr. Richard P. Belcher, Jr., Academic Dean at Reformed Theological Seminary. Click HERE.

In regards to Dispensational Theology, there are basically six things that are essential and this is where I will spend the bulk of my time. In the meantime, I would encourage you to compare and contrast the two on your own to be able to determine where you stand on the issue because the bottom line is that one of them is wrong and the other is right. There is no way for them both to work in harmony with each other. You will lean to the one or to the other in your approach to the interpretation of the Bible or you will be terribly confused. Just make sure that you are informed and not just regurgitating something you heard someplace which is the norm in our society today. It is just laziness. Our faith is worth more than that.

The first essential belief to Dispensationalism is that the primary meaning of any passage in the Bible is found in that passage of the Bible. The New Testament does not reinterpret or transcend the passages in the Old Testament in any way that would override or cancel the original intent of the author. This is called a high view of Scripture and it simply means that the author said what he meant and meant what he said when he said it and who he said it to. That does not mean that other passages can not shed new light on what the author meant, but that they simply can not altar what the author originally meant. This approach is at total odds with Covenant Theology.
Posted by Building Lives International at 1:28 PM