Directional Devo - Not All Are The Same 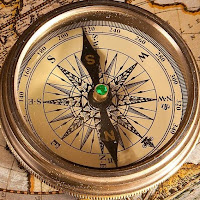 The bottom line is that there are some who profess to be Christians, go to church, take the Lord’s Supper, get baptized, go through all of the motions, but are not truly Christians. The proof is that they left because if they had been of us, they would no doubt continued with us.

Of these people, Peter says in 2 Peter 2:21-22 For it had been better for them not to have known the way of righteousness, than, after they have known it, to turn from the holy commandment delivered unto them. (22) But it is happened unto them according to the true proverb, The dog is turned to his own vomit again; and the sow that was washed to her wallowing in the mire.

J. Vernon McGee said, “You can wash a pig, put a little bow around his neck, polish his toes, brush his teeth, and take him into your home, but it’s still a pig!  In the end, it will go right back to the mud hole it came from.”

This even happened in Jesus’ ministry with Judas. He seemingly walked like, talked like, and looked like a true disciple on the outside, but of him, Jesus said in John 6:64, there are some of you that believe not…Have not I chosen you twelve, and one of you is a devil?
Posted by Building Lives International at 7:40 AM